Rome in about 6 hours 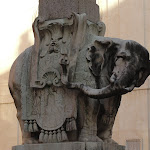 Personally, I would never take a boat cruise on the Mediterranean sea. It’s not because cruises are dull, or only for elderly people, but because of the fact that when in a port or a city, you’ll only have one day or less to explore. Imagine: Athens in one day, or 4 hours in Palermo. Impossible to get more than just a tiny glimpse of what a city is about.

However, some do go on cruises and it’s their convenient way of seeing as much as possible in a short period of time. Americans do Europe, as Europeans do America, in less then two weeks, preferably. For those who try to do Rome during such a cruise, I know some that do, here is my suggestion to tick off the most important highlights and even do some things the Romans do. It’s a special version of a walk through Rome I did once with my mother, so it must be doable in one day for everybody below the age of 63 with at least two working legs. In a google map the exact route can be found. It contains several possibilities, a shopping one, a classical one, or a combination. In the map I have added some extra highlights that are not in Google yet. Of course also this explanation could be more elaborate, however for a short stay a short explanation is more appropriate. 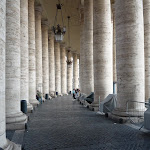 Start in the Vatican, get there by tram or metro (take a one day ticket for the public transport for 4 euro’s), get of at station Ottaviano, walk straight to the columnade or go right to the museum. Only do the Vatican museums if you are early (around 10 am). Make a reservation (here) and skip the line. [Tip for the museum: do not stand still at every statue, you won’t make it through the day. I always check the following statues: the kouroi, Laocoons group, Medusa and Hercules, then quickly pass the tapestries and maps (but this is also the place where one can preview what is in the Sixtine Chapel on smaller displays) and take more time for the stanzen (see the picture of the famous philosophers school) and finally the Sixtine Chapel. Pictures are hard to take there, if not forbidden, so buy a guidebook, it contains better photos and more information, there are many stands on the streets that have acceptable ones, but in the museum shop (at entry/exit) or everywhere in the museum there are better ones.

Then the Saint Peters cathedral. I am always overwhelmed. And every time I am impressed by Michalengelos Pieta, immediately right after the entrance in the absis. Nowadays it’s not allowed to touch Saint Peters foot anymore. That’s better for everyone.

Now, walk on to campo Fiori (flowermarket) and maybe buy some local specialities (e.g. dried tomatoes), or have lunch. If you take a pizza, try a pizza zucca fritti (zuchini flower pizza).

[this is where the google map has two options: a shopping route and the classics route. The latter immediately continues to the forum Romanum. Description is for the shopping route.]

After lunch move on to piazza Navona, the Pantheon and the Trevi fountains, checking two little churches on the way: S. Maria Sopra Minerva (with the obelisk on an elephant in front) and the S. Ignazio with a fake painted coupola.
At Trevi we have an icecream (also available: liquor, see map). After crossing the main shopping street (Via del Corso) we end at the Spanish Steps. In between is the via Condotti where Keats and Kelly may have been drinking their espresso at Cafe Greco, a beautiful bar, but expensive, as all shops in the Condotti.

[Again here there are several options depending on the sightseeing pace: right back, continue directly to the classical centre, or take a little detour to Piazza del Populo where the church is where Angels & Demons starts.]

At piazza del Spagna you can take the metro to the Colloseum. I wouldn’t buy a entrance ticket, but just enjoy it from the outside and for afar peak on to the forum Romanum. The big open space used to be the circus Maximus where Ben Hurs race could have been. Cross it, perhaps play a little, and then walk up the opposite hill and cross the street. This the Aventino hill. Follow the via Santa Sabina and on your right you can enter a garden with a beautiful view on Rome (Vatican). A little further on the road is a keyhole with a surprise when you peek through it…

After a downhill walk to Testaccio, my favourite part of Rome. Have dinner (pizza and fritti) at Remo and take a taxi home.

Drinking, especially espresso, is done standing at the bar (after first ordering and paying at the register). Drinking on a terrace is more expensive generally, but if you want to do that, find places not on the big squares (Piazza’s) such as Piazza Navona, in front of the Pantheon ect.. Cappuccino after 11 am is by Italians considered to be for women and gays.

Shots that go with a coffee after diner: Amaro (Amaro Lucano is my favourite; Limoncello (be careful not to buy a present bottle, that’s too sweet and contains to little. There is one liquor shop close to the Trevi fountain that lets you taste sometimes); and of course Grappa.

At lunch pizza is what I generally eat, though some restaurants don’t serve them at lunch (check for pizzerias other than trattorias). Running out of time: take a pizza a taglio: the fast way of taking a square slice of pizza on the go. Much cheaper and quicker, but less tasteful.

This website uses cookies to improve your experience while you navigate through the website. Out of these, the cookies that are categorized as necessary are stored on your browser as they are essential for the working of basic functionalities of the website. We also use third-party cookies that help us analyze and understand how you use this website. These cookies will be stored in your browser only with your consent. You also have the option to opt-out of these cookies. But opting out of some of these cookies may affect your browsing experience.
Necessary Altijd ingeschakeld
Necessary cookies are absolutely essential for the website to function properly. This category only includes cookies that ensures basic functionalities and security features of the website. These cookies do not store any personal information.
Non-necessary
Any cookies that may not be particularly necessary for the website to function and is used specifically to collect user personal data via analytics, ads, other embedded contents are termed as non-necessary cookies. It is mandatory to procure user consent prior to running these cookies on your website.
OPSLAAN & ACCEPTEREN